The Kingdom of Kerry is the mountain capital of Ireland. The mountains of Kerry are among the most dramatic in the country, many extending over 2,000 ft high and offering superb views of the countryside. The deep u-shaped valleys and numerous corrie lakes were formed as a result of glacier movements at the end of the Last Ice-Age.

Kerry has so many great hikes on offer that it can be difficult to narrow down the search. Hikes vary from climbing the country’s highest mountain, Carrauntoohil, to stunning coastal family walks.

The Slieve Mish Mountains overlook Tralee Bay and run along the eastern half of the Dingle Peninsula. The numerous peaks are of important ecological value as they support populations of many rare plant species such as Betony and Cornish Moneywort.

Standing at 1,040m, Carrauntoohil is the highest mountain in Ireland and is set among the beautiful Macgillycuddy Reeks in Co Kerry. There are several routes up, though even the most straightforward requires good hillwalking and navigation skills, while others are serious scrambling or rock-climbing routes. It’s a challenging climb, but it’s also truly magnificent.

Carrauntoohil overlooks three U-shaped valleys, each of which containing their own lakes. To the east of Carrauntoohil is the Hag's Glen, to the west is Coomloughra. and to the south is Curragh. 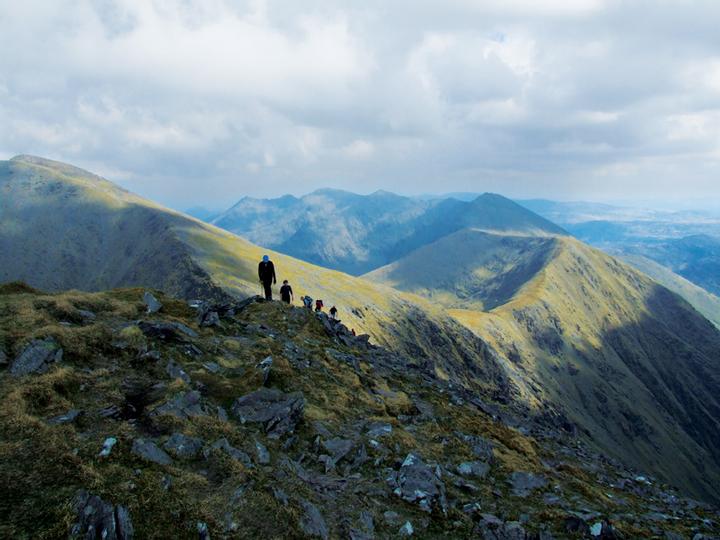 The traditional route to the summit is via The Devil's Ladder, a gruelling trudge up a badly eroded gully path southwest of the loughs, which is unpleasantly loose and unstable. An alternative route ascends via Brother O'Shea's Gully (some rock scrambling and good route-finding ability required), a steep and challenging route through spectacular mountain scenery. The easiest descent is via the Zig-Zags to the east of the Devil's Ladder.

Given Carrauntoohil’s closeness to the Atlantic Ocean, the weather can be very changeable very fast, so you should be prepared Climbing Carrauntoohil should never be attempted without a map and compass (and the skills to use them), proper hillwalking boots, waterproofs and spare food and water.

Kerry is so picturesque that literally everywhere you look is postcard worthy and Purple Mountain is no exception. Purple Mountain gets its name from the colour of the sandstone rock, which emits a purple hue under certain light. At 830 metres or 2723 ft it still represents a bit of a challenge to climb. The Purple Mountain Group is bounded to the west by the Gap of Dunloe, which separates it from MacGillycuddy's Reeks range.

For moderate walkers and families, Torc Mountain is an extremely popular and scenic moderate 2-2.5-hour (7.5 km) walking route to the summit of Torc Mountain (535m). Here you can view spectacular 360 degree views of Killarney town and lakes, Muckross House, the Killarney National Park and the McGillicuddy's Reeks, County Kerry in the south west of Ireland. The famous Torc Waterfall is at the base of Torc Mountain off the main Ring of Kerry Road about 5 miles (8.0 km) from Killarney.

Mount Brandon, located along the Dingle Peninsula, stands at 3,414 ft and is the second highest mountain in Ireland. It is associated with St. Brendan, patron saint of Kerry, who set up a monastery at the foot of the mountain in the 6th century. It is also protected as a Special Area of Conservation (SAC) due to its abundance of arctic and arctic-alpine vegetation. A hike up Mount Brandon will take you to the highest point of the Dingle Peninsula and is one of the great mountain walks on the Wild Atlantic Way.

Caher is Ireland's third-highest peak. The mountain lies to the southwest of Carrauntoohil, in the MacGillycuddy's Reeks range in County Kerry. Caher is often climbed as part of the Coomloughra Horseshoe, which takes 6–8 hours and is described as one of Ireland’s classic ridge walks. Climbers refer to the narrow path that runs along the top of Caher West Top and neighbouring Caher, as the Caher Ridge.

The high rocky faces of the mountains of Kerry provide an ideal nesting place Peregrines (protected species on the EU Birds Directive), Buzzards and Sparrowhawks. 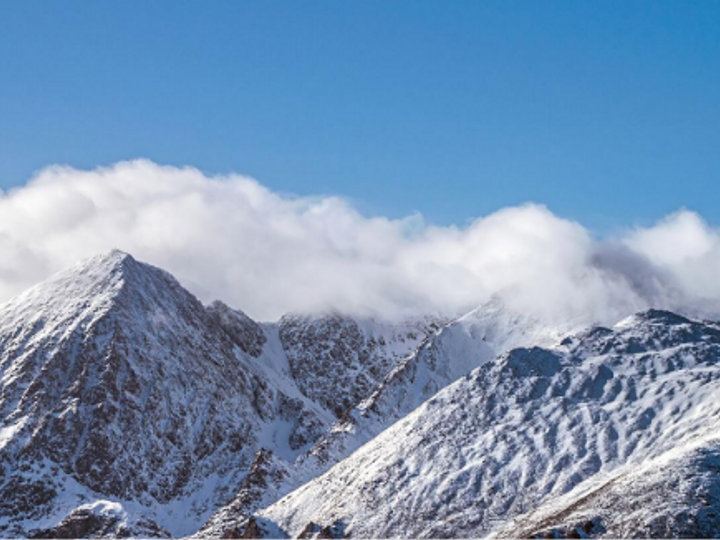