Travelling round County Kerry, you can’t miss these turreted, ivy-clad castles and houses. They are a visual, structural link with the past, to a time when areas were defined by the castle or ‘Big House’. Some of Kerry’s historic houses, like the magnificent nineteenth century Victorian Muckross House mansion, set against the stunning beauty of Killarney National Park, are owned by the state.

Many historic Irish houses are open to the public as attractions and welcome daily visitors.

Derrynane House the ancestral home of Daniel O’Connell, is a public museum commemorating one of Ireland’s leading historical figures and arguably the greatest ever Irishman.

Ross Castle is a 15th century tower house located in Killarney, County Kerry. It is a typical example of the stronghold of an Irish chieftain in the Middle Ages and is fully restored and furnished with period oak furniture.

Muckross House, once visited by Queen Victoria, is situated on the shores of Muckross Lake within the stunning surroundings of Killarney National Park. The house and grounds are located 3.6km from Killarney town in County Kerry.

The Slea Head Famine Cottages offer an enchanting and haunting experience for visitors who would like to get a true feeling of what it was like to live in Famine Ireland.

A substantial part of the front of the castle survives consisting of two large, square towers of four storeys, standing almost to the original height of 15.3 metres, connected by a wall of the same height and linked together by an arch on one side.

Built about 1801 as a signal tower against a possible French invasion, Ballydavid Tower had fallen into disuse by the middle of the century and was briefly reoccupied during the First World War.

This building was the home of the first supervisor of the Valentia Cable Station, James Graves.

The lighthouse itself is maintained by Dingle Harbour Commissioners and was built in 1885 for a total cost of €747.88. Its purpose is to guide boats to the seaward of the Crow Rock which may be seen off Eask Tower to the west.

This is the shapely hill with the prominent tower on its summit which stands on the south side of Dingle Harbour. It can be reached by branching left from the Ventry Road at Ballymore, 4km west of Dingle.

3km north west of Ballyferriter Village are the remains of this castle, the birthplace of the soldier poet Pierce Ferriter, who was one of the last Irish chiefs to hold out against Cromwell's army in the 17th century.

Gallarus Castle was built by the Fitzgerald’s, and is one of the few surviving castles on the Dingle peninsula. It is a four-storey tower with a vaulted ceiling on the fourth floor.

Minard Castle is said to have been built by the Knight of Kerry, and it is the largest fortress on the peninsula. It is one of the locations used in the film "Ryan’s Daughter", where Rosy met the English Captain.

The Franciscan Friary was founded in the 15th century and is in a remarkable state of preservation. The tower was added after the church was built and is the only Franciscan tower in Ireland which is as wide as the church.

In a field to the south west of the church is a round castle dating from the 13th century. The two storeys which remain are joined by a staircase within the wall, and the first floor has the remains of a fireplace.

Home of the Leslie family since 1690, Tarbert House is a Queen Anne Georgian building.

Ireland's oldest synoptic weather station is a few minutes from Cahersiveen town on the Waterville road.

The striking 30-foot wall of this 16th century castle stands proudly in the enclosure of a promontory fort, the Castle Green and has prime location with magnificent views the main beach, cliffs and Atlantic Ocean in its home at Ballybunion.

Arabella House is a late Georgian country house, packed with many original architectural features and a distinguished history.

Milestone Heritage Site traces its origins to the First Transatlantic Telegraph Cable laid 1866 from Ireland to USA 1866 connecting for the first time the old and the new world in global telecommunications. 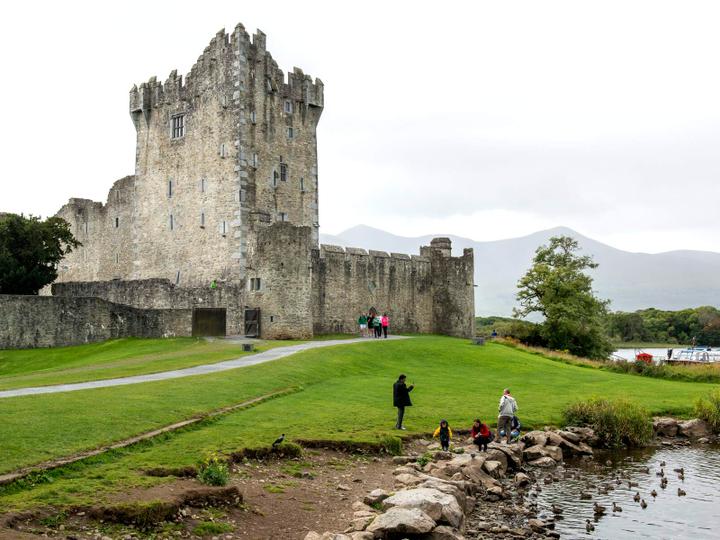